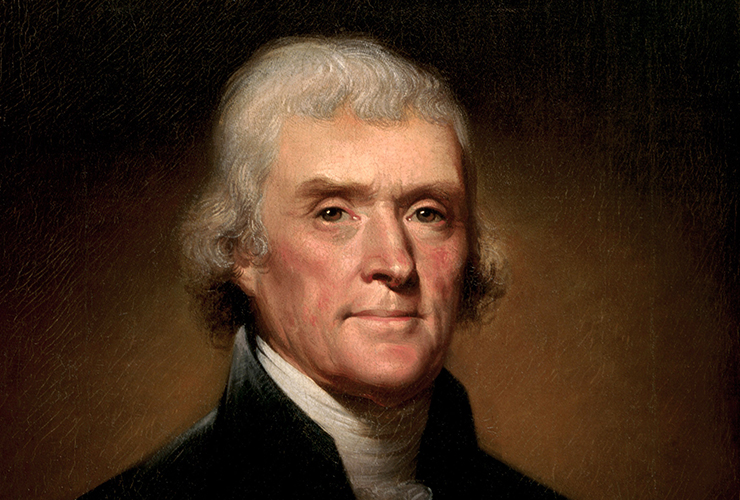 One of Thomas Jefferson’s last letters was written on June 24, 1826, declining the invitation from the Mayor of Washington, DC to join a celebration of the 50th anniversary of the signing of the Declaration of Independence. All three surviving signers of the Declaration declined the Mayor’s invitation due to their poor health. Jefferson was 83, John Adams was 90, and Charles Carroll of Maryland was 88. The Mayor also invited the former presidents Madison and Monroe, who also declined to attend for health reasons.

Madison, age 75, honored the occasion with a lengthy letter including these words, “[This] will be the day which gave birth to a nation, and to a System of self government, making it a new Epoch in the History of Man.” (Spelling and punctuation is Madison’s)

Jefferson realized the importance of the 50th Anniversary of his Declaration of Independence of July 4, 1776, and his letter included these inspiring words (spelling and punctuation is Jefferson’s, bolding is mine):

“May it be to the world what I believe it will be (some parts sooner, to others later, but finally to all) the Signal of arousing men to burst the chains, under which Monkish ignorance and superstition had persuaded them to bind themselves, and to assume the blessings & security of self government. the form which we have substituted restores the free right to the unbounded exercise of reason and freedom of opinion.

“all eyes are opened, or opening to the rights of man, the general spread of the light of science has already laid open to every view of the palpable truth that the mass of mankind has not been born, with saddles on their backs, nor a favored few booted and spurred, ready to ride them legitimately by the grace of god. These are ground of hope for others, for ourselves let the annual return of this day, for ever refresh our recollections of these rights and an undiminished devotion to them.”

We know that Jefferson died after noon on that July 4, 1826, and few hours later, so did his friend and colleague/rival John Adams.  The unbelievable timing of their deaths marked the end of the Revolutionary period.

According to Gregory S. Schneider, from the Washington Post’s Richmond Bureau, the Jefferson letter “was reprinted far and wide and even emblazoned on silk scarves, as a reminder of what unites us beyond the divisions of the moment.” (My bolding) To read Schneider’s entire fascinating article, click here https://www.washingtonpost.com/news/retropolis/wp/2017/07/03/jeffersons-last-public-letter-reminds-us-what-independence-day-is-all-about/.

Was Thomas Jefferson a flawed and imperfect man? Yes! Does his bad behavior, such as owning slaves, fathering a child with one his owned slaves, getting into mountains of debt by continuously renovating Monticello and by ordering luxuries that he couldn’t afford, do these behaviors take away from his intellectual impact and from his contribution to the creation of our country? Maybe a little.

According to Harvard Professor Annette Gordon-Reed, as quoted in the Schneider Washington Post article, “Jefferson believed in progress…He…believed that one day Enlightenment values would spread across the world.”

Jefferson and his colleagues had to break with the past in order to create the self-governing country that we now enjoy, as we pursue life, liberty and happiness. Enjoy your 4th of July celebrations, and try to remember how the world changed in 1776, a mere 243 years ago.

If you want to bring some change to your personal or professional world, please contact us.  We would love to hear your ideas for a better future in the United States and, as Jefferson envisioned, in the world, and don’t forget your own piece of the world. We use design to make the word a better place for people who work, play, age, live, and learn.