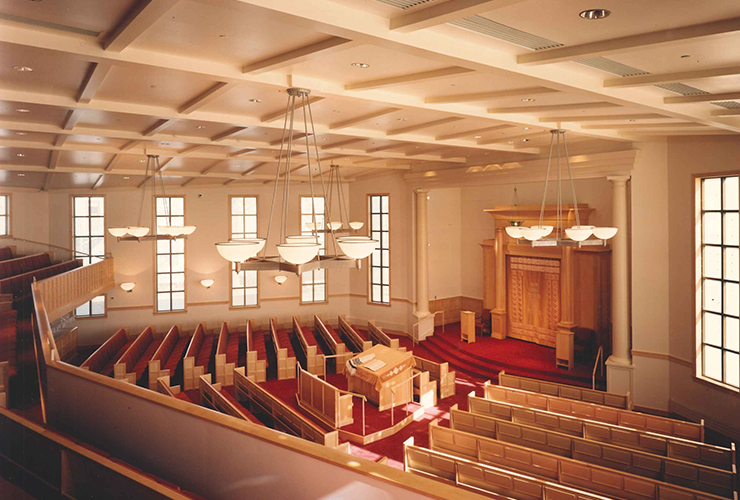 One of the greatest gifts of this firm has been the opportunity to collaborate with other architects, some famous (BCJ, Gund Partnership, e.g.) and some not so famous (Handlin, Garrahan and Associates, William Sloan Associates, e.g.). Fame is funny. Since the famous have a national and local reputation for high design, these firms have their fans and their detractors (jealousy, perhaps?).

This is a story about meeting Graham Gund for the first time. People told me “all” about him: he only likes neutrals, he doesn’t want your ideas, he’s not friendly, etc. The client had fired Gund’s first choice of interior designer, so I was prepared for the cold shoulder. I got kind of worked up about it. Those readers who know a bit about our work know that I LOVE COLOR! The only thing to do was to wear a bright yellow suit to my first meeting with Gund for the Young Israel Synagogue of Brookline. As you might imagine, the “trailers” didn’t really represent the “movie”.

There is a quiet about Graham Gund – he’s thoughtful. His family is from Cleveland (I’m from Cincinnati). He is not unfriendly – but perhaps he is a little shy. He listens and he is open minded. He needed decisions, so he and the project needed me to help the committee make those decisions.

My approach to working with other architects, who may have already been on the project for years before I come on board, is to figure out what the architect and client are trying to achieve. Graham Gund was articulate. He and his team visited Israel and Europe to see what older synagogues were like. He studied the history of the Jews and their synagogues. By the time I was hired, there had been five years of design development for the constricted site in Brookline, MA. The prior synagogue had burned down in 1994, and I had helped the Congregation get temporary seating right away. They remembered the kindness and asked if I would help finish the project with GUND Partnership. Graham Gund and John Prokos showed me the drawings, models, and schedule. There were deadlines approaching on lighting, flooring, wall finishes, religious accessories, fabrics, the dividers between men and women, and the modern artistic sanctuary windows.

The Gund concept was (in my best recollection) to recreate the feeling of the Tent – the temporary Ancient Jewish Temple by curving the ceiling, and to commemorate the permanent Mishkan Temple with two columns on either side of the ark, and two columns on the outside facing east, not due east, but the true direction of southeast toward Jerusalem. Like the Touro Synagogue in Newport, RI, the sanctuary building would not be square to the site, but would be canted toward Jerusalem. They wanted the space to be filled with light, despite the urban location. Keeping all of this in mind, I then met with the Interiors committee of the shul, led by the charming and wonderful Shirley Feuerstein, who thankfully had great taste. It was relatively easy to bring the committee to agreement on the pressing interior design items, like carpet and fabrics, not so easy to get sign-off on some of the religious items like the mehitza divider. The client coordinator/project manager was a member of the Congregation, Norm Kram, of blessed memory. He helped instill the project with love and attention to detail.

We worked to get Graham Gund and his team the interior design that would mesh seamlessly with their architectural concepts, so we could “deliver” the right building for the synagogue’s community. The process and the project had a great result. Our work at Young Israel of Brookline led to working again with Gund on the Young Israel of New Rochelle, a project that took over nine years to get to completion. The Brookline synagogue also led to getting hired by an eye surgeon to design his eye clinic, after he and his wife (an oncologist) attended a wedding at the Young Israel (imagine that).

Design is a team sport, and I’m as passionate about our projects as a NE football fan is about the Patriots. Next, I’ll tell a story about how my path crossed with Bob Kraft’s, owner of the Patriots.
If you are interested in getting design help when the project is complex and the deadlines are looming, feel free to contact us. Our design “capes” are ready to save the day.

Please leave your comments below.